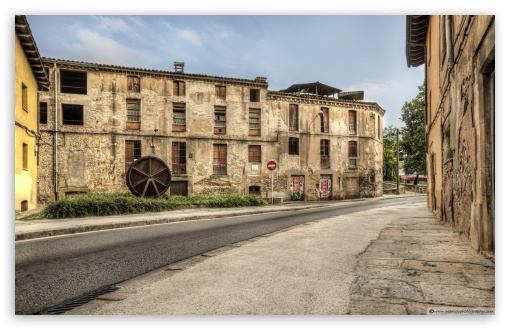 Description: The Tanneries Neighborhood (“Les Adoberies” in Catalan), it’s located on the historical center of the city of Vic, between the walls of Pere II and the Mèder River. It symbolized one of the most important periods of the Osona capital, and the growth of the tannery industry in the region. There are documents related to the tannery activity from the XII century, and during the XIV century it become a popular activity in the area. However, it wasn’t till the XVIII century when the guild of tanners decided to group all the activity and construct the actual Tanneries Neighborhood. Nowadays, the tannery industry has become more technical. Because of that, during the XX century, all the activity was moved to the outskirts of Vic and the old ones were abandoned. The good news is that the government declared this neighborhood as a zone of national interest back in 2009. However, because of the recent economic crisis no action has been done to prevent further deterioration.